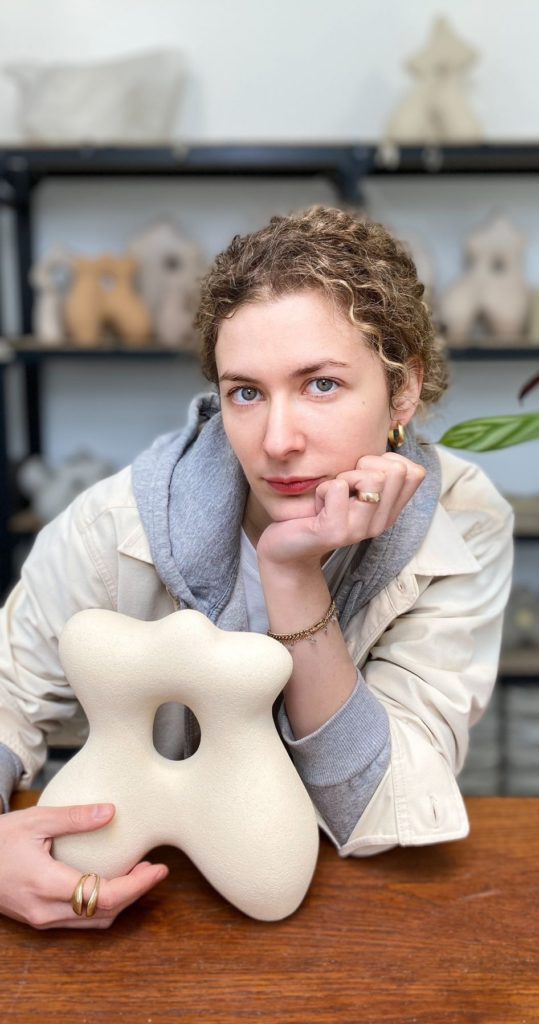 Hermine Bourdin is a sculptress based near Paris. She has been passionate about sculpture since a very young age, and after working in illustration, graphic design, stop-motion animation, and design, she decided to pursue her passion and learn to sculpt under the guidance of various masters in stone, wood, plaster, and sandstone, her material of choice.

Many of Bourdin’s works feature organic circles, an ancient symbol of feminine strength. The circle is unbroken and unbreakable, paying tribute to the resilience of women. To Bourdin, every woman is a potential sculptress of life, with the circle representing either the womb or Earth, but also the potential of every woman and their sisterhood.

Bourdin also uses digital tools as a new material for exploration and creation, allowing her to defy the laws of the physical universe through new technologies, liberating her of the static and gravity constraint of material work.

Bourdin’s physical sculptures have been exhibited in renowned galleries such as the KÖNIG Galerie in Berlin, Galerie Melissa Paul in London, Galerie Julie Caredda in Paris, Galerie Philia in New York City, as well as Geneva, Copenhagen and Prag. Her digital art has been exhibited during the CADAF Digital Art Month in Paris, at Art Basel Miami, at the Musée des Archives in Paris during Paris Design Week, in New York City, and Lisbon.

Bourdin was born on November 1, 1988, and is of French nationality with Czech heritage. Her art studio is located in Seine St Denis, Grand Paris. She is currently working on her next solo show.